ZettelKasten(ZK) method is a method of optimizing workflow of learning and producing knowledge.

Zettelkasten — How One German Scholar Was So Freakishly Productive is a good introduction to the method.

Here is twitter therad by the creator of roam research. See also these two essays by Niklas Luhmann who was the originator of this method .

Talk How to take smart notes by Sönke Ahrens. 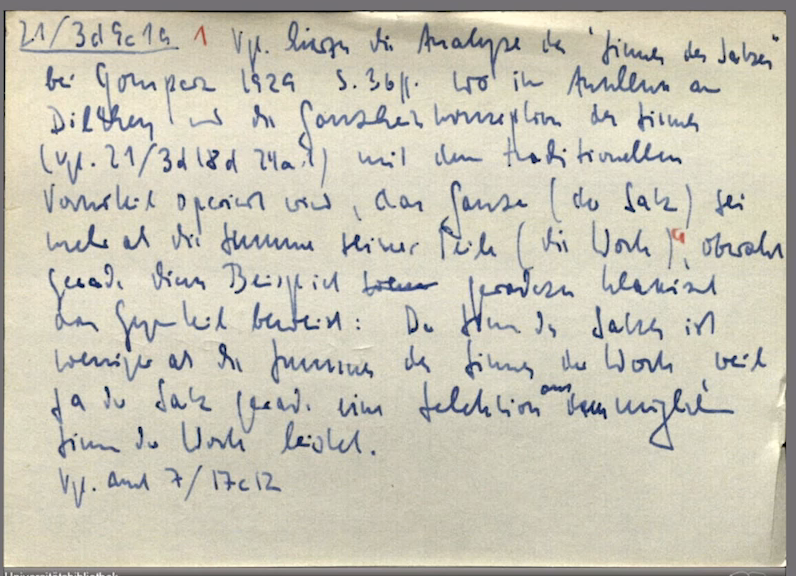 “the above makes sense intuitively” (subtext: but does not work very well in practice) 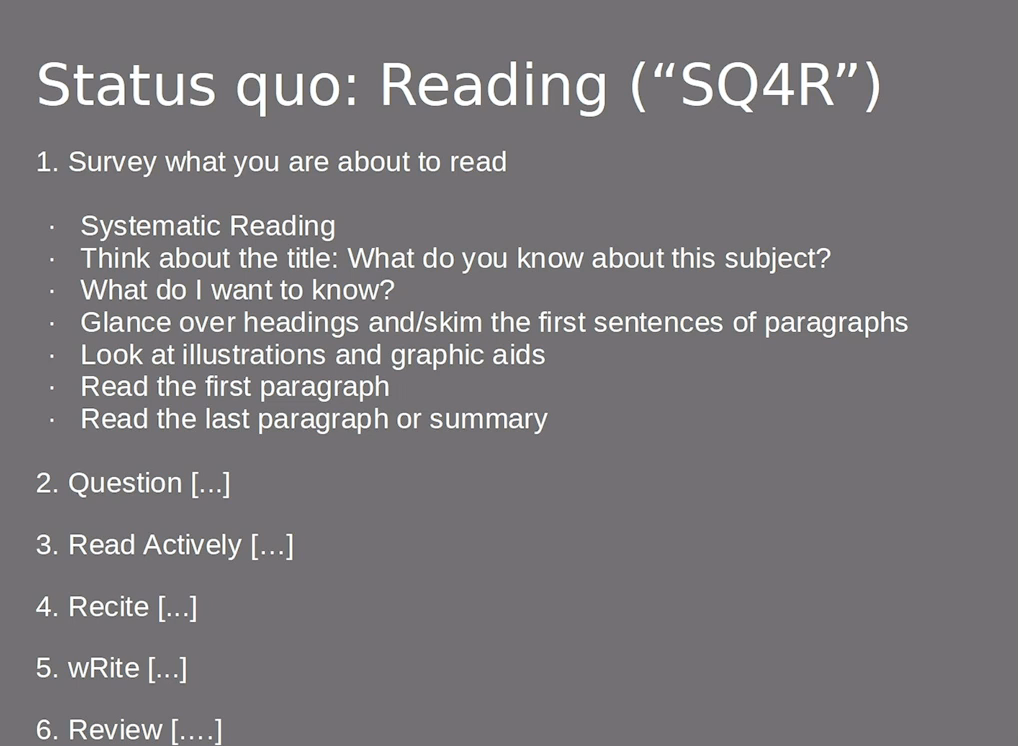 If you can’t explain it your own words, you have not understood it – Richard Feynman.

What happens when you use the ZK system:

Mentions “Inbox” by DavidAllen’s GTD. difference is, this is not goal oriented, but “insights”.

“real experts dont make plans, they become experts in making informed decisions in the context they are in”. 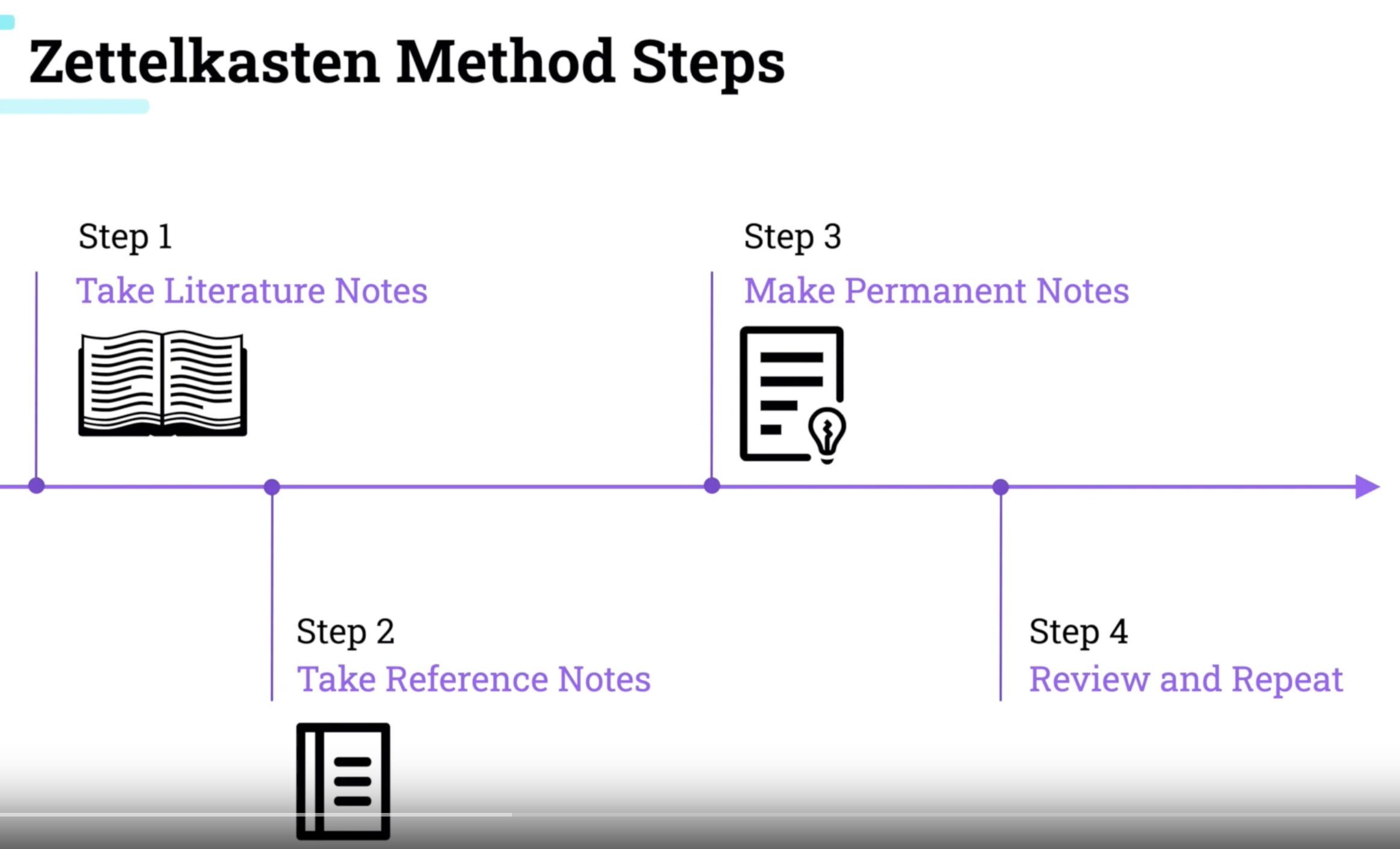 GitHub - nobiot/Zero-to-Emacs-and-Org-roam: Step by step guide from zero to installing and setting up Emacs and Org-roam on Windows 10

(NOTE: not doing this anymore; using voodoopad instead)

Some comments by lobste.rs user MordecaiMalignatus need further thinking on how to use ZK:

Seeing these Zettelkasten-management systems pop up recently has been very interesting to me. Being German, the Zettelkasten was known to me earlier than for most Americans, so I’ve been stewing on the idea for quite some time (and wrote my own software to support it, as one does)

Most of the now-available Zettelkasten have the following things I see as flaws these days:

1.Titles for cards. These, to me, are an error and lead to ideas being discarded that have value in context. Often it’s much easier to have an idea in context and to write it down. Forcing titling of ideas leads to ideas being discarded that would otherwise (in context) be valuable. 2. The use of meaningless numbers/dates/hashes for file names. If you look into how Luhmann used his Kasten, he made heavy use of ad-hoc sequences and branched ideas based on ancestors, hence his tree-like notation for card IDs. This is a completely ignored aspects in many of the modern implementations. My own Kasten started out this way, too, until I found that it encouraged bigger individual notes - every note tends to be an island, and groups don’t actually form. 3. The treatment of the Kasten as a graph, rather than a tree. The Kasten is not meant to be an arbitrary graph - it’s a tree, where later nodes relate to their ancestors and build on them. Cross references are possible and encouraged, but need to be explicit. > This leads to many people treating a Kasten like a local-hosted wiki with fancier/more integrated interface - everything that was already possible with a directory full of markdown files and some editor support. In writing my own emacs-based solution for this, I’ve fallen into all of the above pitfalls, repeatedly re-writing my kasten into something that I will actually use and converse with.

For further reading, the Kasten is partially transcribed/digitized by the university of Bielefeld. The project can be found here (in German), and it might give some insight into how the person that invented it used it. The common literature that introduced the idea was How To Take Smart Notes, which was targeted at academic writing. Since then it seems the idea has taken off since Roam became a thing. I’m curious as to whether or not my personal conclusions will be replicated in other people’s experiences, or if I’m just a weirdo here.