My notes from this video - Streaming ETL in Kafka for Everyone with KSQL a presentation by Hojjat JafarPour (pron: ಹೊಜ್ಜತ್)- Software Engineer at Confluent.

KSQL is the streaming language on top of Kafka.

The talk is about streaming ETL with Kafka and Confluent Platform.

Kafka has connectors to move data in and out of other systems.

But these are simple transformations that act on single records. If you want to aggregate, filter, or apply UDF (user defined functions), you need something more .. like KSQL.

You do not need an additional cluster unlike other systems where you need stream processing system.

KSQL has the notion of stream and table as first class citizens (topics), where stream is data in motion, and collected state of stream as table.

When you are filtering, you are treating the topic as a stream.

When you are doing counts, you are treating a topic as a table.

There are three types of WINDOW aggregations:

Example of a “Web analytics pipeline 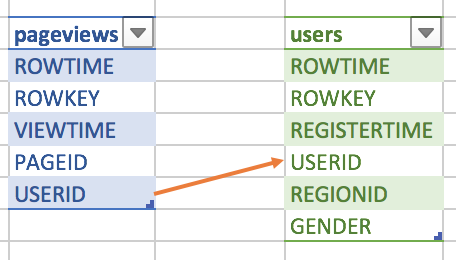 The select will show a running stream of output.